What if Mata Hari lived?

So you know I’m totally psyched about a new project, it’s a buzz!

But tonight I have a new Flash Fiction. Last week the fabulous Chuck Wendig posted his customary Friday Flash Fiction challenge and a link to a random title generator – I got one I liked, and then forgot it. And got busy. So this week I tried the generator again. One of the options was actually Little man’s name – Little Man’s boys. It might be held for the future…. But this time round I did get Mata Hari in the Silence. Whoa.

So I Googled. As you do. Did you know Mata Hari, the Dutch exotic dancer in the early 1900s, ultimately executed as a spy, never had her body claimed by a relative. Her body was donated to science and her head (for a courtesan and one of the world’s foremost exotic dancers, possibly the least interesting bit about her) kept in the Museum of Anatomy in Paris, but in 2000, archivists discovered that the head had disappeared, possibly as early as 1954, when the museum had been relocated. Again, whoa. 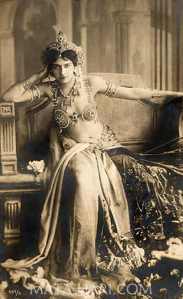 the picture is from here: http://www.mata-hari.com/mata-hari-pictures.html
how great is she? This pic is from 1910!! Visit the site.

What if she didn’t die? What if she was relocated to Argentina as many WW2 Nazi’s were many years later?

So I give you ‘Mata Hari in Silence’.

The delicate wind chime tinkles, no that’s not right, its more melodic than that. It, well it chimes, I’m far too worn out to come up with something witty.

The breeze bumps the crystals against each other, shards of light scatter every which way, falling across my hand, darting across chest. I’m transported back to a time when my life was exotic and exceptional, when diamonds adorned my body, music followed me, underscoring my every waking moment.

I mesmerised, I hypnotised and I entranced. My dancing cost people their lives, thousands of lives. It changed the world. Honestly.

You wouldn’t think it now, no one would. Most days I don’t even bother to think about it.

Read the rest here – you know you want to!