Of dinosaurs and eagles

This is another short story based on a 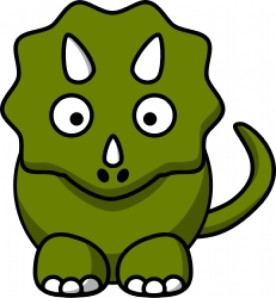 flash fiction challenge posed by the fabulous Chuck Wendig. The challenge this time was to write a 1000 word piece that featured dinosaurs.

I am currently at my self designed Cimarron Session writing retreat and am in the Eagle Room – hence the protagonist. Chuck called his post Must Love Dinosaurs, sorry but my eagle doesn’t, c’est la vie 🙂

From his vantage the giant beasts seemed insignificant. Not quite ant like, it would take a height far higher than he was capable to make the hulking, stupid creatures seem that small.

Still, perched on a craggy outcropping, in the thin air at high altitude, the eagle felt vastly superior. Far below, on the plain, among the long grass, in the forest and deep in the lake, the dinosaurs reigned. Some lumbered, ponderous and clumsy, others small and skittish, all thick headed and stupid.

Even the meat eaters, those that relied on their cunning, strength or size to keep them sustained were beneath the eagle’s contempt. He watched them from his aerie, saw their attempts at stealth and, if he’d been able to, laughed aloud.

Even the most fearsome, the most successful hunters had ridiculous incapacities, tiny arms, lateral eyes, fragile unprotected young.

It baffled the eagle how such a poorly designed creature could dominate the environment for such a long time. He cocked his head to the side and blinked rapidly the thought twisted in his brain, he was unable to make sense of the idiocy that mother nature had displayed in allowing the dinosaurs such carte blanche superiority for so long.

The eagle shifted his weight from his right talon to his left and back again. A shudder ran down his body, his right wing stretched slightly out from his body, just enough for the trailing feathers to separate slightly in the strong wind.

The frustration built, a knot formed in the belly of the eagle. Tensed, the proud head ducked down, the shoulders hunched up and the legs tensed. His wings stretched wide, wider, widest. He waited, feeling the air 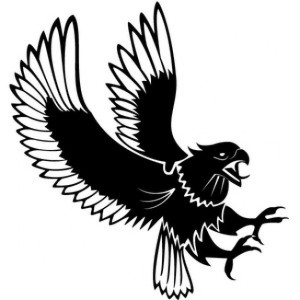 movement, his feathers caressed, wings quivered in anticipation, buffeted by the strong wind.

Able to stand it no longer, his legs tensed like a spring and in a swift and powerful movement he is propelled into the air. Escaping the rock and the creatures below he climbed higher and higher. An arrow loosed into the crisp blue sky. The air thinned, the cold increased, the eagle reached his limit and, reluctantly, turned.

Wings tucked tight to his body, the eagle pierced the sky, punched holes through the clouds, his eyes shuttered against the air that rushed past him.

His speed is unmatched, his exhilaration equally high. King of the sky, even in streamlined flight his chest puffed in pride, his knew and displayed his superiority.

Effortlessly, gracefully he extended his wings, his descent was slowed. He need not display his power so blatantly. He slowed, languorous beats, his great wings rise and descend slowly, enough to keep him aloft. The beasts below him were now large in the eagle’s gaze. His sharp sight saw every scar on every leathered hide, his keen senses were insulted by their fetid breath, their steaming dung. He was offended by their dull, vacuous gazes.

If an eagle could sigh, this eagle sighed.

Even worse than the dinosaurs were the pale, thin creatures who had emerged from the forest. The eagle was yet to understand these animals. They seemed awkward, poorly suited to their environment, their hairless hides were far too thin to protect them. They had no ability to bring down prey without using rocks or sharpened sticks, their talons were flimsy, yet dexterous. They seemed unable to graze and they were loud, they made incessant noise, the stupid dinosaurs found them easy prey.

And yet, their eyes were not vacant. They did stupid things, certainly. Their young were ridiculously vulnerable. But every so often the eagle had seen them work together, they combined forces and used planning and forethought for their defence or to bring down a dinosaur.

But they could not fly. The eagle was supreme in his domain. A powerful beat of his wings propelled him forward, a dip, and turn of his tail feathers and he banked sharply.

He tired of his surveillance, exhausted by the frustration brought on by his superiority. He turned again 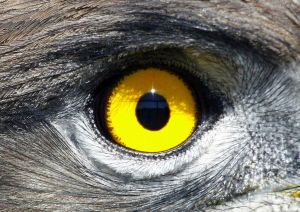 , feathers caressed by the breeze. His keen eyes spied his favourite crag. He would return, to rest and survey from his mountaintop.

A coldness crept over him, gradually. Starting at his tail, keeping pace with his flight and then, gradually, it extended. The shadow crept along his body, he didn’t register the change, the blotting of the sun, until it crept up along his wings.

Without a conscience thought the eagle banked sharply, his direction angled sharply to the right. At the same time he folded his wings back slightly, his speed increased, he dove closer to the ground.

Above, the shadow, inexplicably grew larger. The eagle was confused, he changed direction again.

The shadow shifted, lifted. And then, to his right, he saw a bird. A monstrous, enormous bird. Each feather was as long as the eagle himself. Enormous.

The eagle’s wings stopped. A heartbeat. The eagle fell. Feathers at every angle, head over tail over head over wings over talons. Tumbled, plummeted, like a stone.

Mind and body lost and fallen. The last thing the eagle saw before his body was pierced by the jagged rocks was the mighty bird’s eye.

It was vacant, stupid. The damn thing was a dinosaur, beneath his contempt.

And then the eagle’s body struck the rock.

6 responses to “Of dinosaurs and eagles”