Kaylee wakes, instantly alert and active. Two years ago it was much harder to drag herself into wakefulness when her phone vibrated at 3am, her body would protest, reluctant to leave the warm cocoon of her blankets. But by now it’s easy, second nature.

About six months ago she started going to bed fully dressed, that had been Laura’s idea and it was a good one. Richard barely noticed her leaving anymore, she stilled her phone after less than a second, slid from under the covers and moved quickly out of the dark room. Her shoes and a warm jacket waited for her in the hall and she was in the car in less than four minutes. 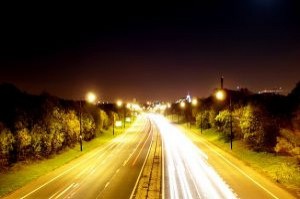 The streets are notably busier than when Kaylee started her daily pilgrimage. Two years ago the dark roads were deserted, traffic lights changing and directing non-existent cars at empty intersections. This morning she waits three minutes at the end of her street for a break in the stream of cars. She’s going to need to start getting up earlier or she’ll be too far from the gates to see anything.

Finally a car slows and headlights flash, allowing her to merge. In her rear vision mirror she can see that it is Will and Anne. She envies them. Richard refuses to join her, he won’t consider it and is scornful of her passion. He also keeps a compost pile, Kaylee has kept that a secret from the others. Things are not good with Richard, she’s not sure which one of them will do it first, but she knows it’s time to finish things.

There are so many cars, the road is almost as light as day. Well the one side anyway, the cars are all headed to the same location. Kaylee knows other towns have buses, the people all travel together. It’s a new idea, a sense of community is beginning to build around what had been a shared but solitary worship.

When there’s no traffic it’s a 10 minute drive to the depot for Kaylee, today it’s taken double that. She starts to worry about the rush to the dump site. People can get a little crazy, even though there’s at least two hours before the first truck will arrive, the Purifiers are desperate to get to the dump site, to snare their preferred site.

Kaylee shouldn’t worry, she has a plan, the same one every morning, but still the anxiety level does raise her heart rate a little. Even in this traffic she will be at Faith’s house in 22 minutes, they will climb the hill behind her house and from there they have a view of the whole site, including the road leading in. It’s perfect.

The phone vibrates and Kaylee sees a message from Laura. She was the first to arrive, naturally, and has invited Kaylee to come up and sit in her car, right at the gates.

It’s going to be a glorious day.

Laura was one of the first Purifiers in this town, the first that Kaylee met. If they have a leader at all, it’s Laura. There’s been talk about needing to organise things better, the numbers are growing, quickly. That’s one reason Kaylee is taking Laura to Faith’s house for the Purging and Covering today. Faith’s property would be an ideal site for some sort of centre, Kaylee is going to introduce them. Another reason for her heart rate rising.

She parks her car on the verge, as close to the vehicle in front as she can manage. Will and Anne pull up equally as close behind her. Pulling her orange beanie on, she hops out of the car and starts hurrying forward, to find Laura. Her breath makes pale puffs in the cold night air, it’s dark again except for the halo of lights around the gate.

She taps on Laura’s passenger window and slides in beside her. It’s as cold inside Laura’s car as it is outside, she wonders how long Laura has been here.

They don’t speak, just acknowledge each other with a nod. Most Purifiers prefer to wait for the first truck in silence, reactions after the first truck passes vary, silent tears, frenzied cheering, applause, chanted mantras.

There’s a flash of headlights on the other side of the gate, a truck turning towards them. Kaylee excited inhalation causes her shoulders to shudder. Her heart rate sky rockets. She chances a very quick glance at Laura before her eyes flick back to the gate. Laura is tense, leaning forward in her seat with a white knuckle grip on the steering wheel, her eyes shine.

The gate is moving, the night air split by the screech of the wheels and pulleys. Finally, after what seems like an eternity, Kaylee can hear the engines. There’s rev, a guttural roar. The first driver is a showman this morning. Kaylee grins and can’t help but look at Laura, her joy reflected.

A second rev and there’s movement. The first truck approaches and the car is flooded with light from the headlights. Kaylee is blinded, her retinas will carry the burn for at least an hour. She feels the light fill the car, bathing her face. Despite the freezing temperature a warmth radiates from deep within her chest. The anxiety she felt on her pilgrimage to this spot is replaced with a feeling of right, of order.

The intensity of the headlights dim as the truck pulls alongside them, the lights of the next truck are not as bright, they never are. Both women follow the path of the truck, their bodies turning in unison as they keep that first truck in sight. The car is dwarfed by first the cabin, with its single occupant, and then the white wall of the truck body, and the rounded rear end. ‘Citywide Waste Disposal’. Each grass green letter is the size of dinner plate, comfortingly unambiguous in its message.

Kaylee watches the procession, truck after truck, roaring past in the once silent night. There are Purifiers in other cars, honking their horns, celebrating the trucks and their drivers as they head into the sleeping city.

The last truck passes them and quiet descends, darkness returns. Kaylee realises she has been holding her breath, and exhales loudly, her shoulders relax.

She is comforted by the thought of all those trucks, filing up and down the dark streets of the city, collecting and tidying. When the residents awake in the morning the trucks will allow them a fresh start, all their dirt and filth will have been removed while they slept. She knows a miracle when she sees one, and it is miraculous to take the shame and waste from an entire household of people, to hide it from view and remove it without judgement. Kaylee has tried to explain to Richard what a gift it is, to grant an entire city absolution in one week, neighbourhood by neighbourhood, every week of the year.

These white trucks collect the worst of each person, crush it, obliterate it and then combine it with the waste of everyone, removing individual guilt, and then bury it.

Some Purifiers follow the trucks, but that is generally frowned upon. The only day Kaylee misses the pilgrimage to the depot and the dump site is Wednesday mornings. Her street is collected on a Wednesday.

On collection day she still rises at 3am to search the house for anything that should be disposed of. It amazes her every week how many things she and Richard have purchased that are unnecessary, a waste. It is cathartic to fill her bin right to the top. The group of Purifiers referred to as Junkies try to generate as much waste as they can, filling multiple bins. Kaylee doesn’t hold with that movement. She honours the trucks and the drivers and is grateful and humble that they remove the filth from her home and her life. One bin is enough, more is needlessly wasteful. However she doesn’t take the trucks for granted, she ensures there is no space left in the bin each week.

As the rumble of the last truck grows faint, the road lights once again as  the Purifiers start their cars, keen to start on the next leg of their pilgrimage.

The arrival of the first truck at the dump site for the Purging is a celebration. No one wants to miss the first Purge. Some Purifiers hoard their secret observation point, preferring to observe the Purging and Covering in solitude and reflection. But as the movement grows, many more Purifiers gather together, leave their cars and join one another. There is often music, a great deal of cheering and even dancing. It is this sense of community and celebration that Laura and others want to harness, why they were headed to Faith’s home. 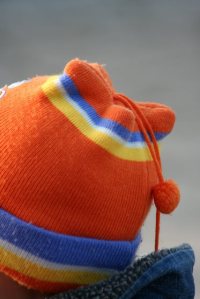 Laura starts the engine and eases her car forward. Kaylee removes her beanie, it is new, a gift from Richard after their last fight. He said it was to keep her warm on these early mornings. She turns it in her hands. Is it something she really needs? Is it necessary? Perhaps it’s a waste, she spends the entire pilgrimage in her car or the cubby house at Faith’s. No, it is wasteful to have this beanie. She’ll throw it out when she gets home. Along with the tag, the bag it came in, the wrapping paper and the card from Richard. Her bin is filling already and it’s only Thursday. The beanie is a good start.

5 responses to “Next to Godliness”